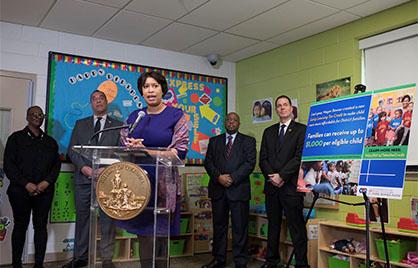 (Washington, DC) – Today, at Board of Child Care in Ward 6, Mayor Muriel Bowser highlighted two tax credits – the Early Learning Tax Credit and the Earned Income Tax Credit (EITC) – that can save District families thousands of dollars during tax season.

“Eligible Washingtonians can put thousands of dollars in their pockets through the Earned Income Tax Credit and the Early Learning Tax Credit; but to get the money, residents must know about these credits and claim them,” said Mayor Bowser. “We created the Early Learning Tax Credit as a way of making early child care more affordable for District families. Now, we want to make sure families know about it and are claiming it.”

In last year’s budget, Mayor Bowser created the Early Learning Tax Credit to make child care more affordable for District families. Through the Early Learning Tax Credit, families with children enrolled in a licensed DC child care facility can receive a tax credit of up to $1,000 per eligible child. An eligible child must be a dependent of the taxpayer and meet the following age requirements: a child under the age of 4 (age 0-3) as of December 31, 2018 or a child who reached the age of 4 between October 1 and December 31, 2018.

Additionally, low-income working families are eligible for up to $9,000 in combined District and federal EITCs. In 2018, 25 million workers received more than $63 billion in EITC refunds nationwide. In the District of Columbia, 50,000 workers received $117 million in EITC refunds. However, approximately 19,000 eligible residents failed to claim their credit, leaving nearly $45 million on the table.

Residents who worked last year and had income of less than $54,884 should learn more about their EITC eligibility. Trained tax preparers can determine if individuals qualify for the EITC and ELC tax credits.